What a beautiful day for a gravel ride! Although, it wasn't sunny at first, it got sunny not long into today's adventure.
We took off from Skep and Skein with 16 of us (but picked up another on the way). There were some new faces amongst the usual crew. We even had a new gal, Lilly, join us. One of the most notable additions was a young man named Sean (or is it Shaun?). He was notable in that the bike he was riding had a large basket on the front. Thus, Sean is now forever known as "Basket Sean". If you think with that big ol' basket that Basket Sean was slow, you'd be thinking wrong. No, the boy had some serious strength and bike handling abilities. Plus, he was a nice kid with a great laugh. A nice addition to our motley crew. 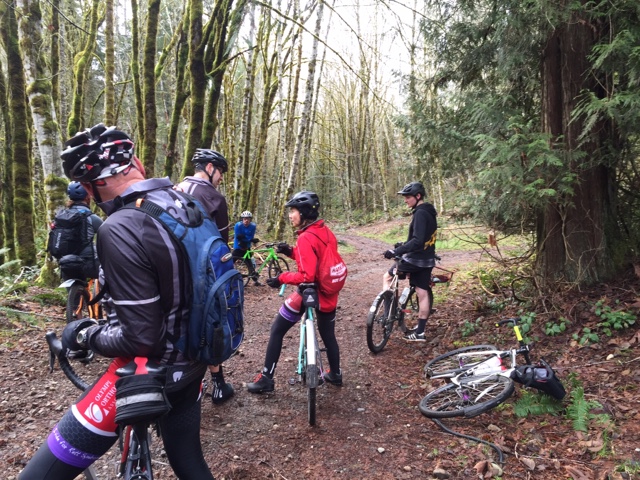 Not the best shot, but you can see some of Basket Sean's basket.
This time, we went down Black Lake Blvd to access the Sub-Black Hills gravel roads. The area we were riding is owned by a timber company that is happy to have cyclists riding their roads and trails. The cyclists are the eyes of the company, letting them know if there are people camping or doing stuff they shouldn't be doing. The first bit was a climb up with some good sized rocks. It required picking my way through, but I managed to pedal all the way (I'm getting more confident at remaining on the bike, even when the back wheel is spinning out).
Once we made it to the top, we had some pretty steep downhill with more rocks. Some of it reminded me of Idaho Hot Springs last summer. Only this time I'm not on Mama Cass. It was still really fun though. After some more ups and downs, we came out to Delphi Rd. Then we headed up into Capital Forest via Cedar Flats and Maple Valley. At the turn to Maple Valley, we stopped to talk about getting past the area where the guy keeps putting more and more obstacles, trying to keep us out. Jean and I mentioned that we had found a better way than trying to cross the creek, so we went that way. Everyone seemed to think it was okay.
I made the climb up B-8400. When I got to the top, there was no one coming behind me. 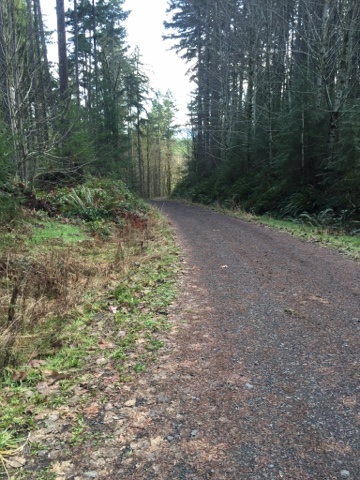 The third hump of the B-8400 climb--no one coming.
Pretty soon, I could hear Jean and Karen. One of the guys had a flat. Before long, Brian and Jeff came along. We moved up into the sun. 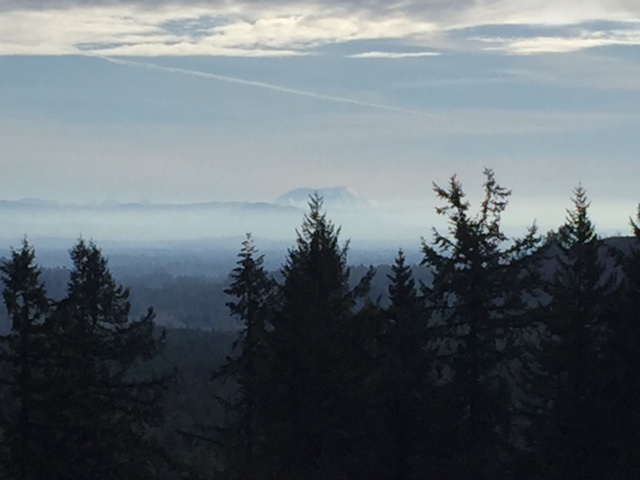 For the first time in a long time, we could see Mt. St. Helens.
Once we were all together again we continued on to B-8000. Curiously, the gate was closed. Of course we just went around and under it. After the gate, instead of going toward Rock Candy parking, we continued up on B-8000. This was the third time I've been this way, but the last time was over a year ago.
After awhile, we regrouped at an intersection. We were turning right. Right was up. 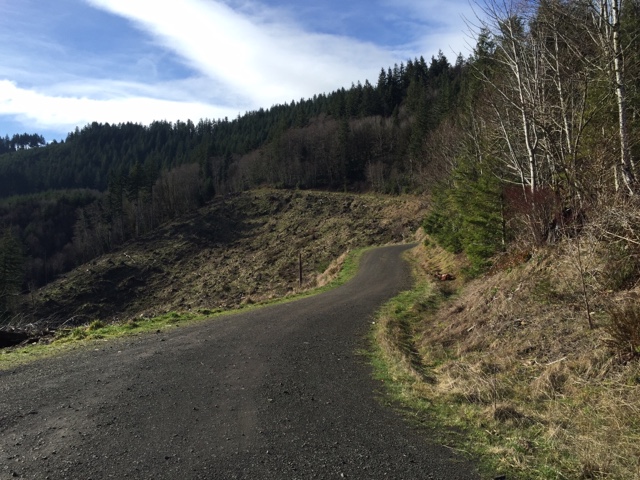 See the road going up? 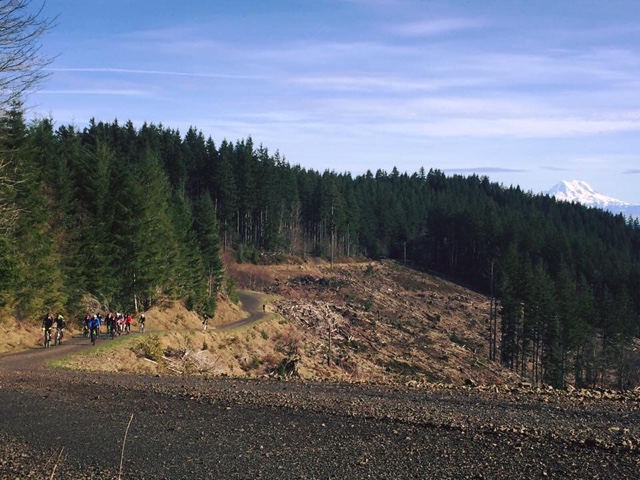 Here we are climbing the hill (photo by Brian). Notice Mt. Rainier.
The payoff for the climb was this spectacular view of three Cascade peaks--Rainier, Adams, and St. Helens. I had to stop and take a photo! 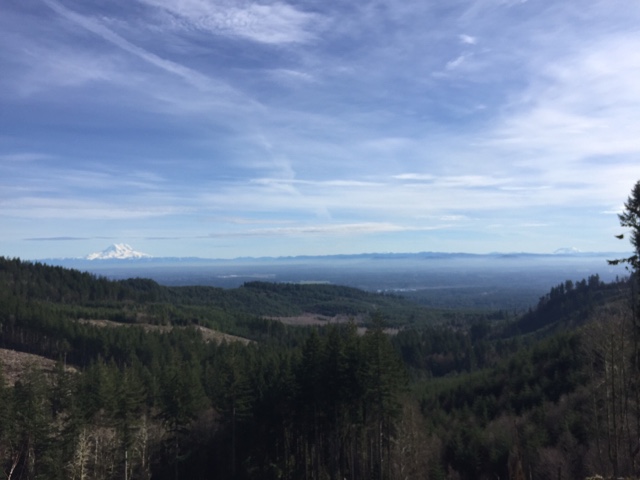 Rainier to the left, St. Helens to the right, and just the top of Adams a bit left of St. Helens.
Of course, what goes up must come down. The downhill was a blast! At one point, the road went up, but I had so much speed I was able to coast up! How much fun is that???
We came to the end of the road. Hmmm...never fear (or...be afraid...be very afraid), Cam had a plan. See, the road may have ended, but there was a trail! Thus began the hike-a-bike section. Here's a couple of photos that will give a clear picture of the trickiest part of this section. 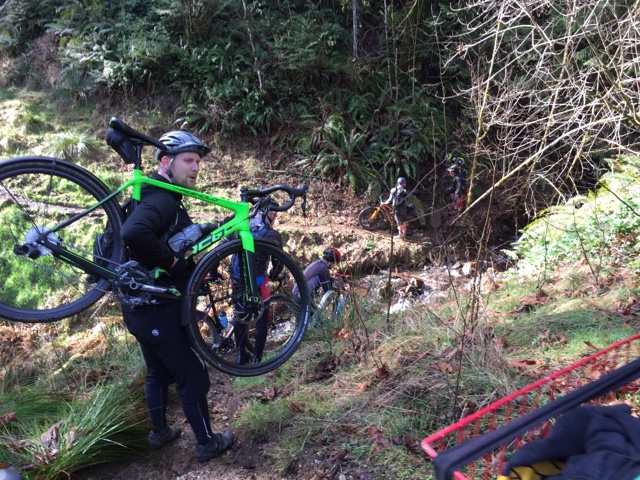 I took this one of hiking down to the creek crossing. 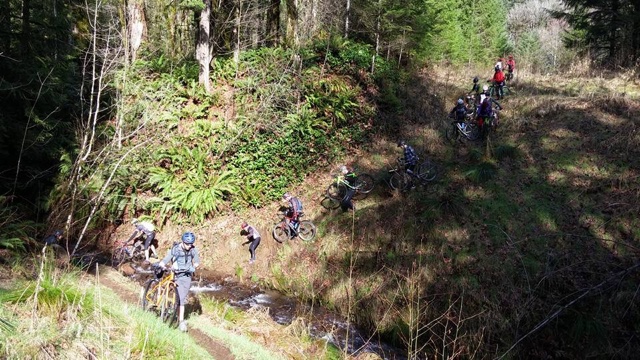 Andy took this one from the other side. When necessary, the guys are great about helping us gals.
We came out to, I think, C-9000. Then we turned onto more singletrack. As I was going along, I thought it looked very familiar. Karen noticed it too. It was the singletrack that Karen, Geraldine, Juliann, and I did in December. That meant another stream crossing. It wasn't too bad. There was a little less water than in December. When we came out to the road, I told Karen I thought I rode more of that than I did last time--okay, not a lot more, but some...maybe. Here's some photos coming out of the singletrack. 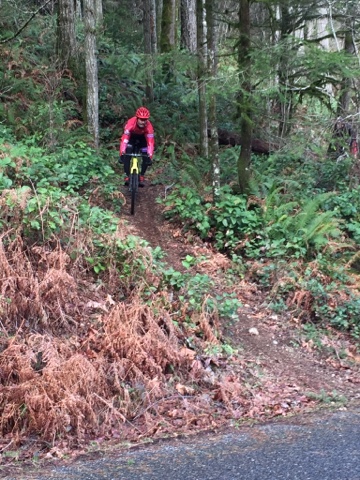 Derik (notice the log up behind--Derik rode over it). 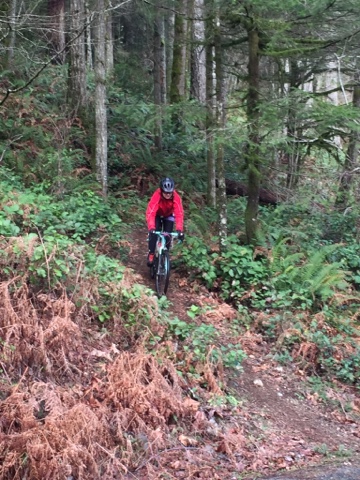 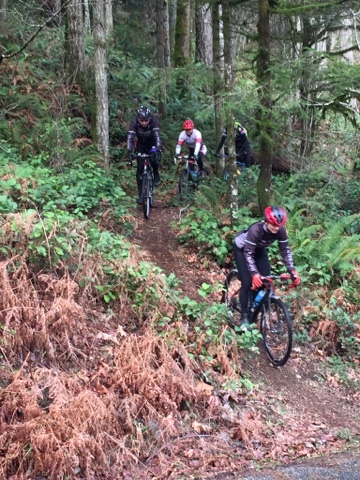 Jean, Bill, Brian, and ???
We rode the road to Delphi, then back to where we had come out of the Sub-Blacks. Now we had to go back up those steep rocky roads we had come down. Although it wasn't easy, it wasn't as hard as I thought it would be. I fully expected to be walking long before I actually did. In fact, I made it up everything except the last part where the rocks were too big and too many of them. Most everyone had to walk at least part of that section.
At the top, Cam said he would take those who wanted to go on the gravel road. Those who wanted to do another singletrack section would go with Kahlil. I wanted to take the road so I would remember it better if I came there by myself. A bunch did the singletrack (Bill said he should have come with us). We met up with them a short time later, and headed down the last bit to Kaiser Rd, and back to the beginning.
Today's ride was great! We managed to finish with everyone who started. No one got lost, and everyone had a good time. A bunch of us finished up with food and drinks at Skep and Skein. Then I rode home (with a full stomach).
This is likely my last gravel ride for awhile. I'll be gone next week, and Team Camp is the following weekend. After that, race season starts. Hopefully, I'll be able to do some gravel in April when there aren't road races every weekend. I figured out I have four cycling seasons--Gravel, Road Racing, Touring, and Cyclocross Racing (yeah, I don't need no stinkin' Off season).
Posted by Colleen Welch at 7:36 PM