This morning Bob got a message from one of the other Tacoma riders saying they were coming to ride with us today. They were leaving Tacoma at 7:30. Bob said we would go when we were ready. We took off around 9:00ish or so. We were less than a mile into today’s ride when Bruce and Sue came toward us in a van. They went on to park at the Park. We waited for them to catch up to us, and ended up getting going around 9:40. No worries though as we only had 28 miles to do. 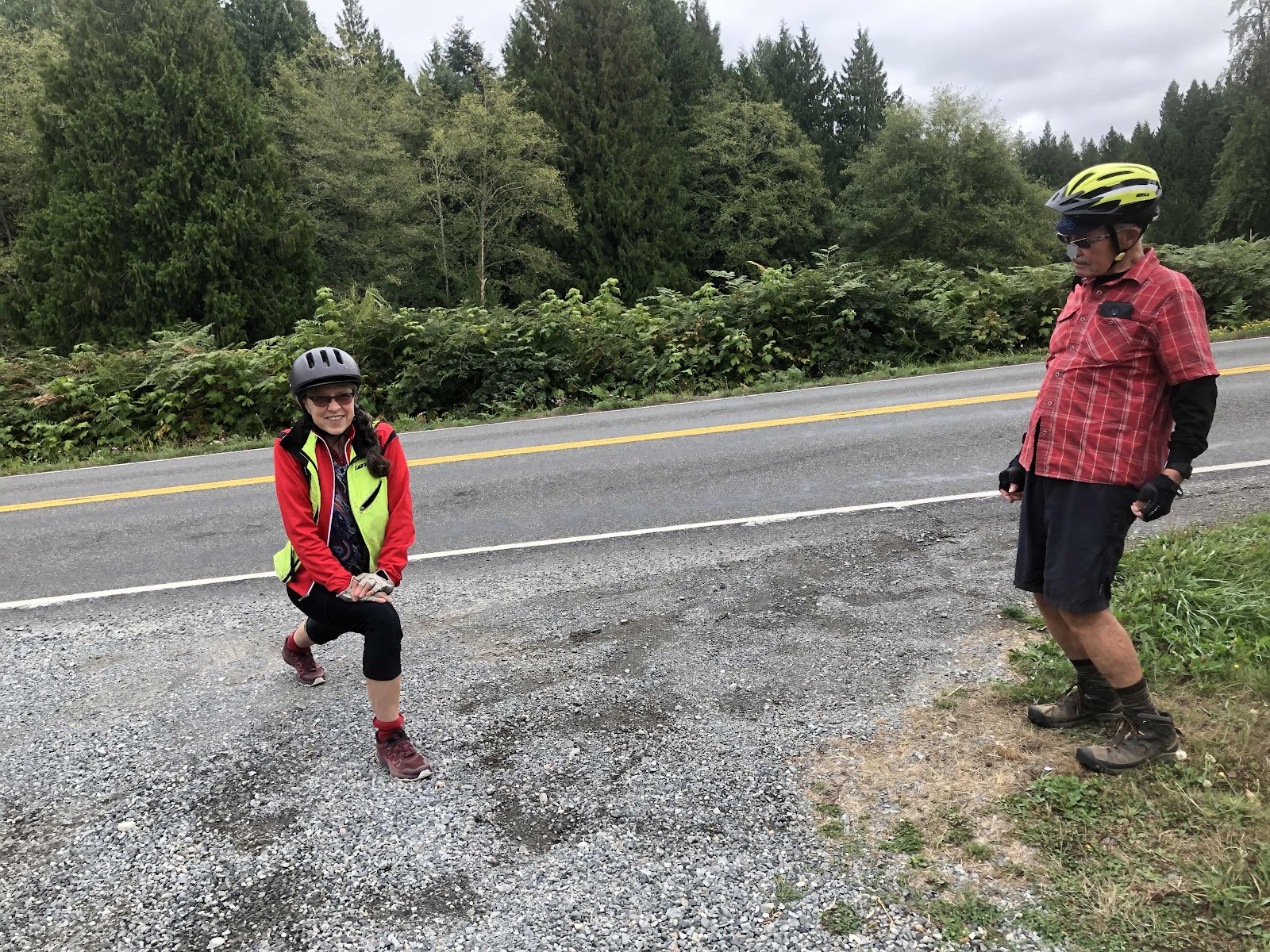 Janet and Bob doing some stretching while waiting. 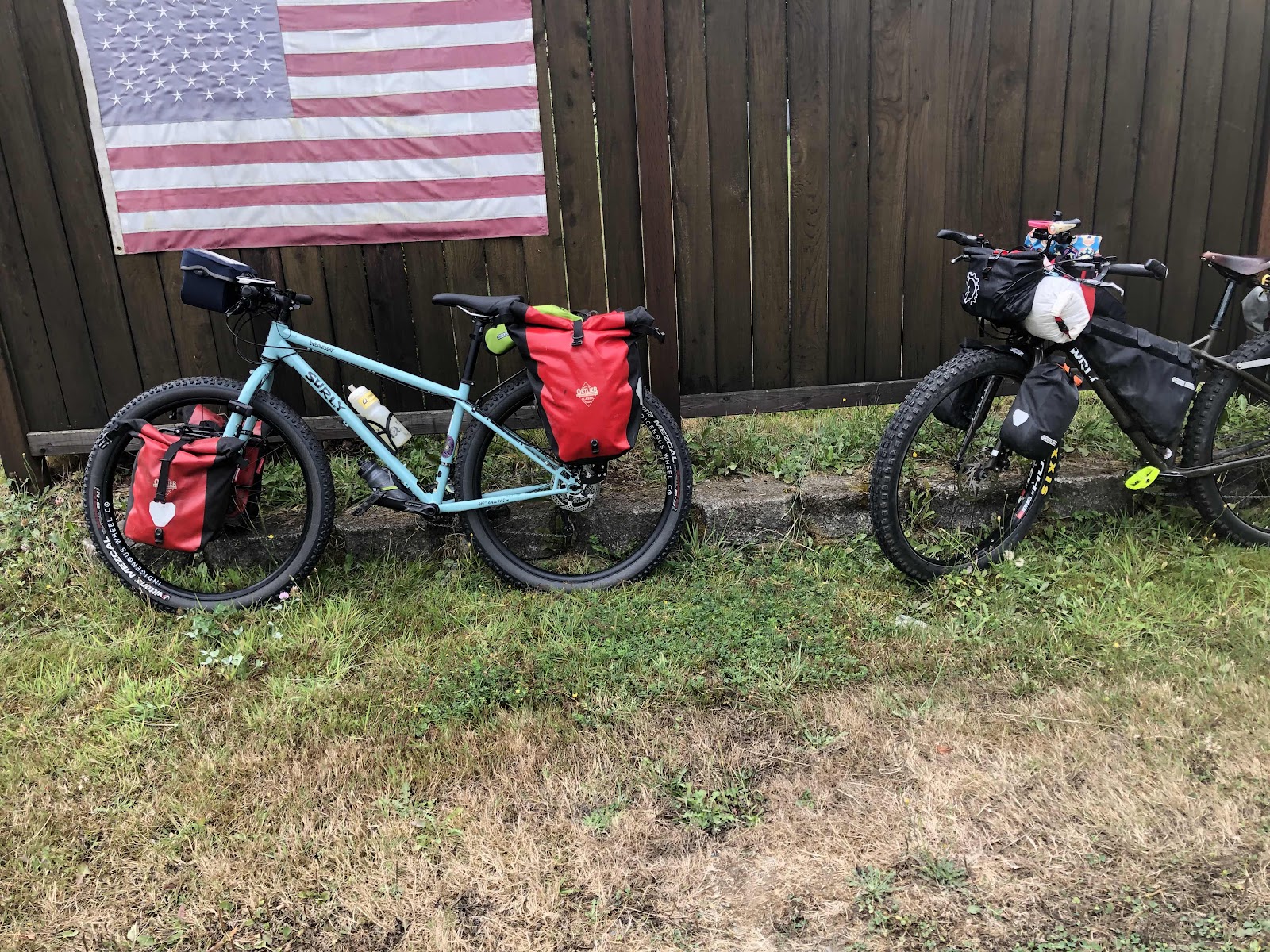 Two Surlys on a fence (Bob’s Wednesday and MC)
We rode some pretty good rollers. We regrouped at the top of a longer one, but Bruce was ahead. Pretty soon he came back, thinking he might have missed a turn. 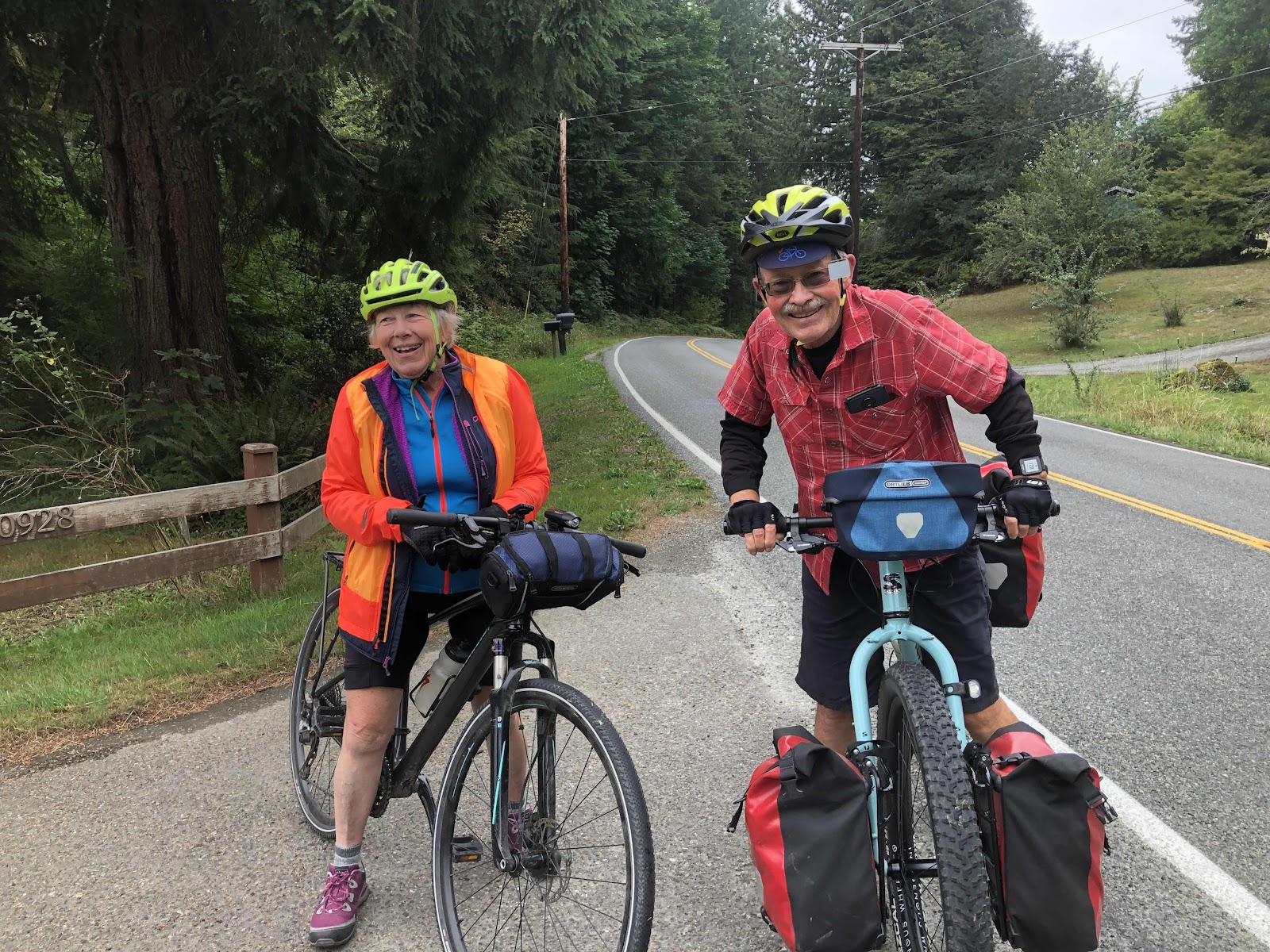 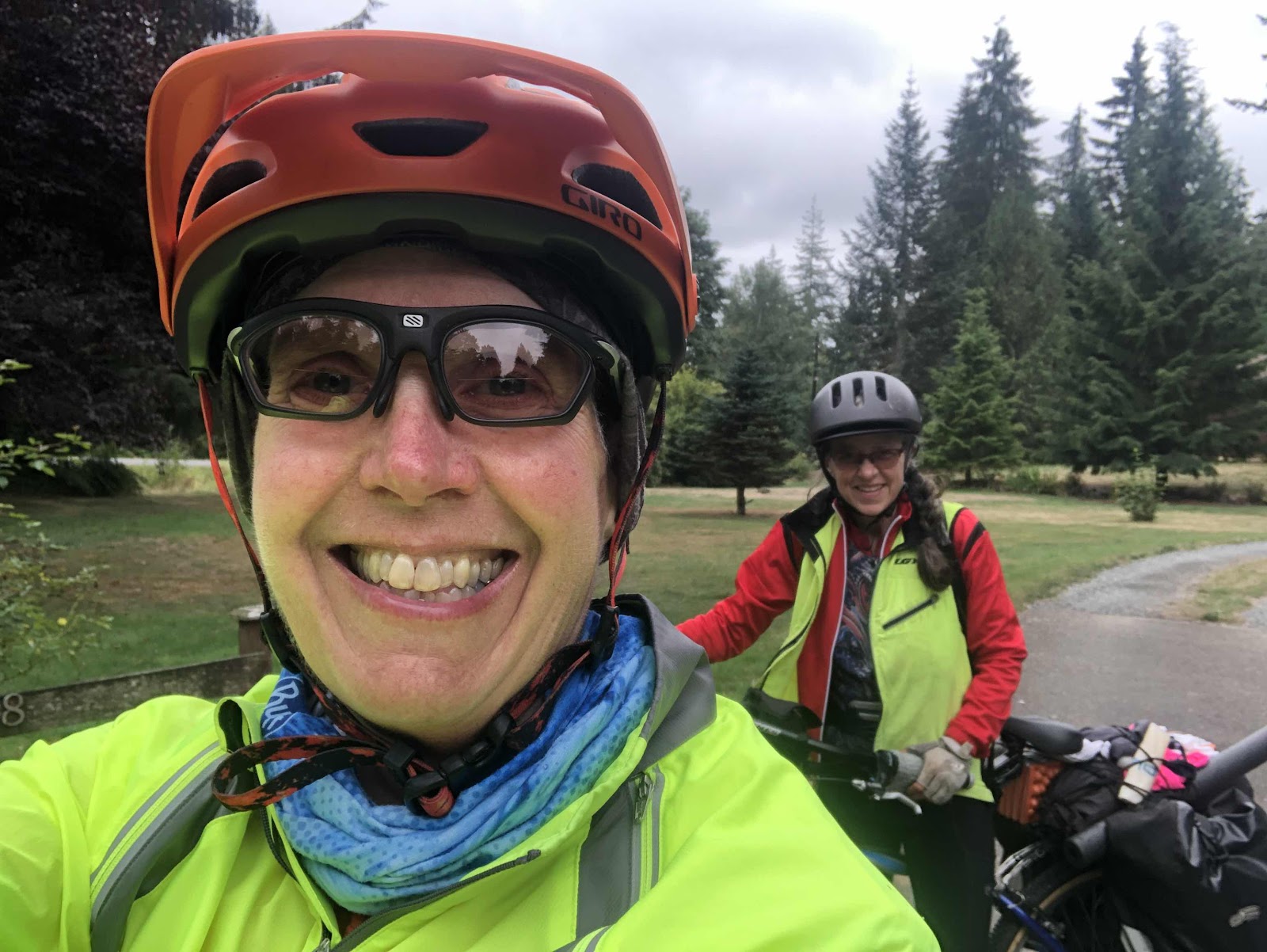 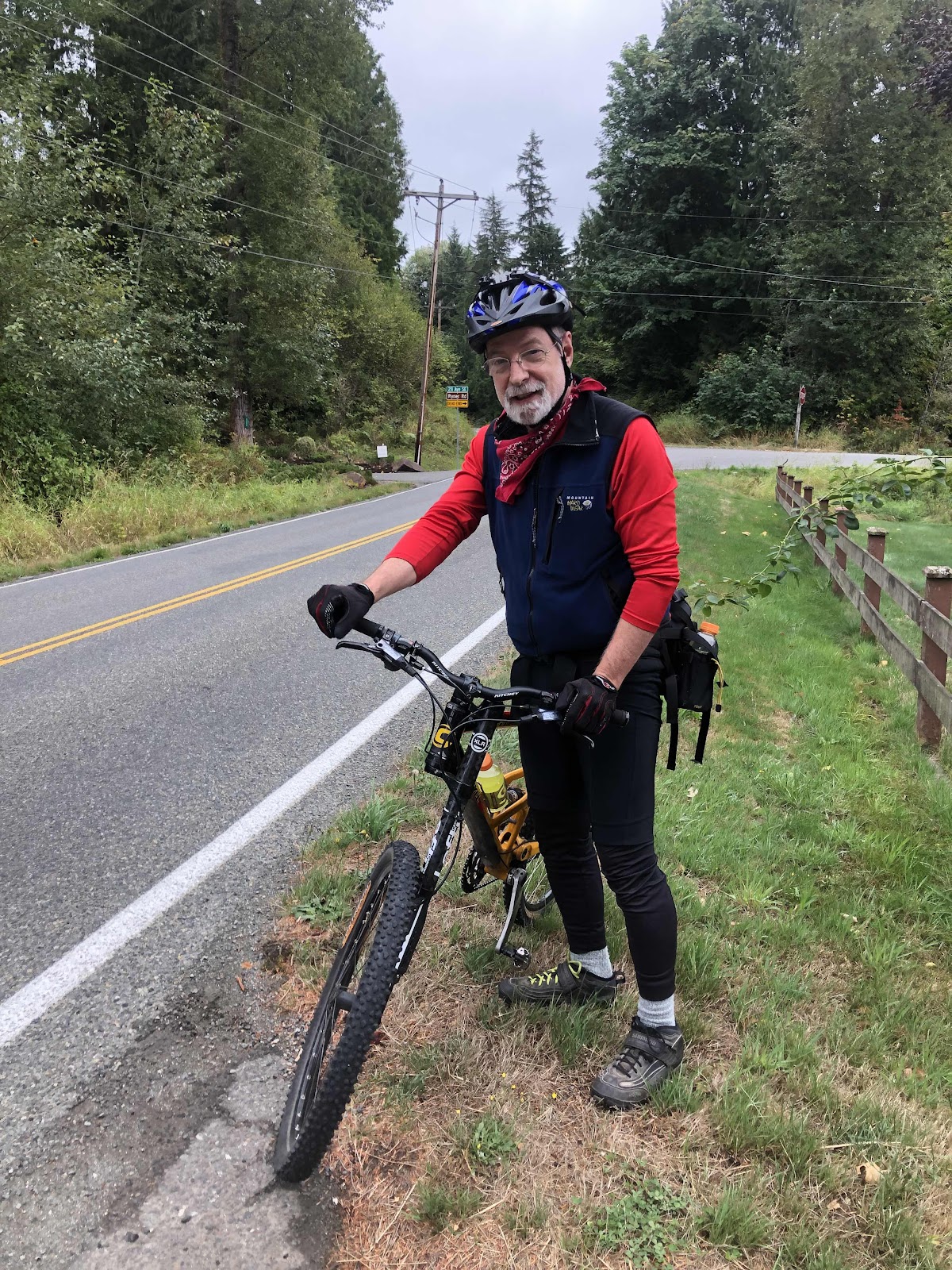 Bruce
We came to where we were to turn left onto a gravel road. There were Private Property signs, but it said it was a forestry road, so we decided it was okay. 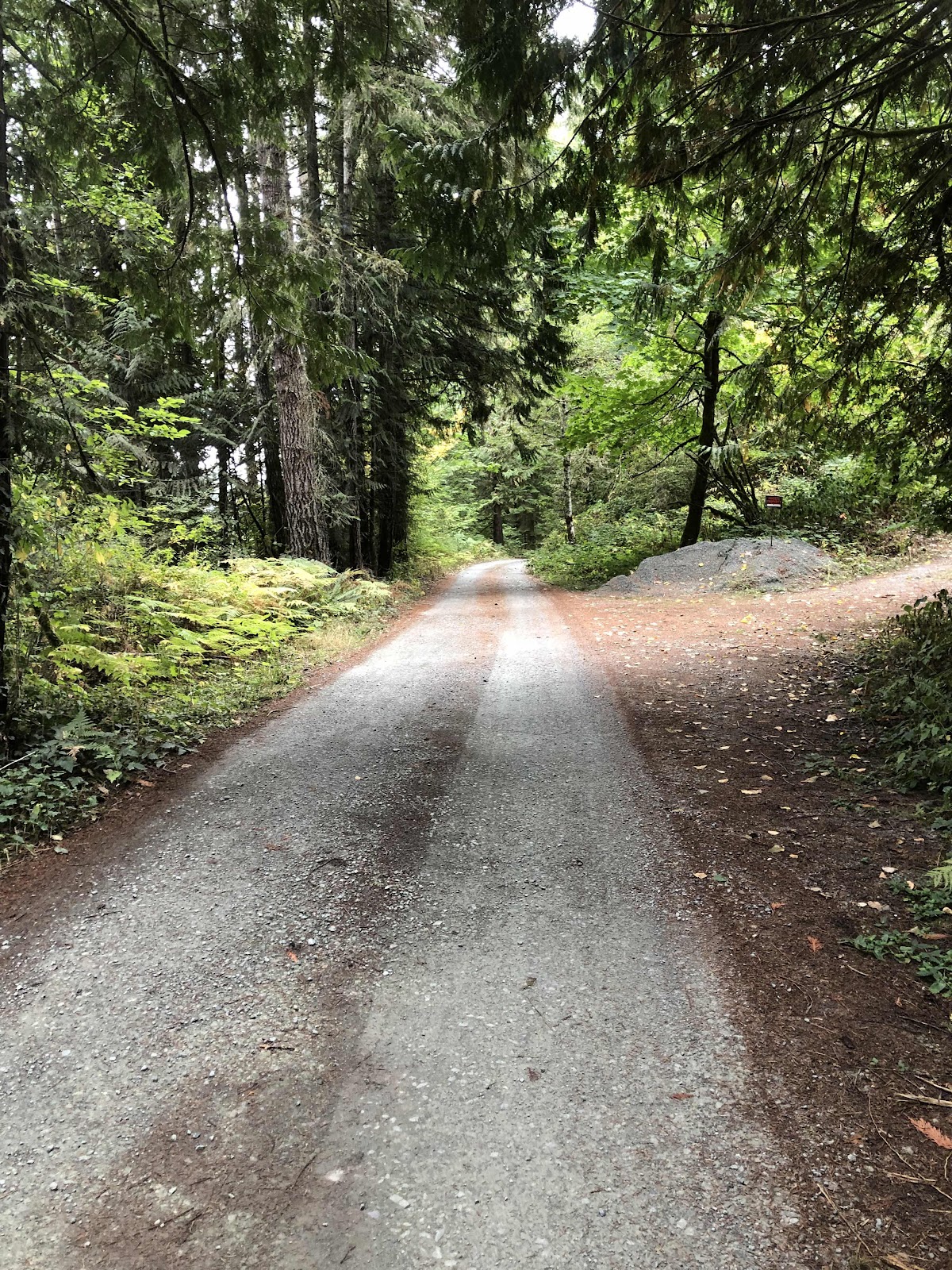 Yay! Gravel!
Bruce and I got ahead of the others (he was on a mountain bike, and well…MC and her beefy tires…). At one point, the Garmin said we were off course, but I kept going because sometimes it does that if the road is slightly different. Also, I hadn’t seen another road. But, alas, we were off course, and the road ended at a house (hmmm…Private Property signs were for real). I turned around, and turned Bruce around, and we went back to where the Garmin said the route was. Sure enough, next to a shed, there was a faint track. We rode down it, but came to a locked gate. About that time, a kid comes up on a tractor to tell us we’re on their property. By that time, we already realized we weren’t going to be able to get through. We turned around and went back out to the paved road. Turns out, when Bob and his girlfriend made the route, they just drew a line where there wasn’t really a road. Ride with GPS had said the surface was “unknown” for that part. The Garmin auto-rerouted us to take us around the “unknown”, and we picked up the route on the other side. 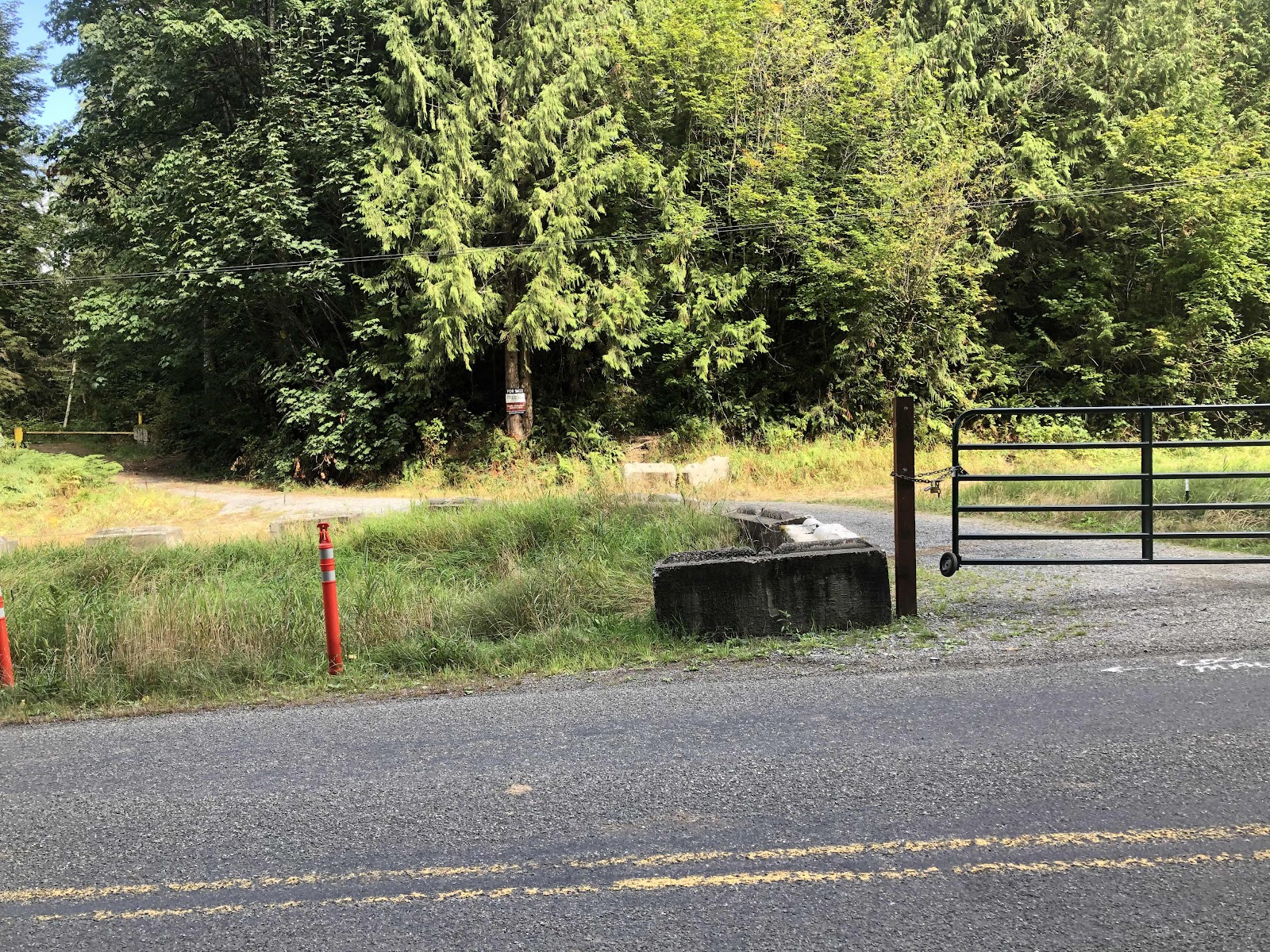 This is where we should have come out. It wasn’t a terrible detour.
The rest of the way into Sultan was pretty easy. We stopped at the Red Market (I needed another breakfast and dinner to make it to Leavenworth). Bob entertained himself on this. 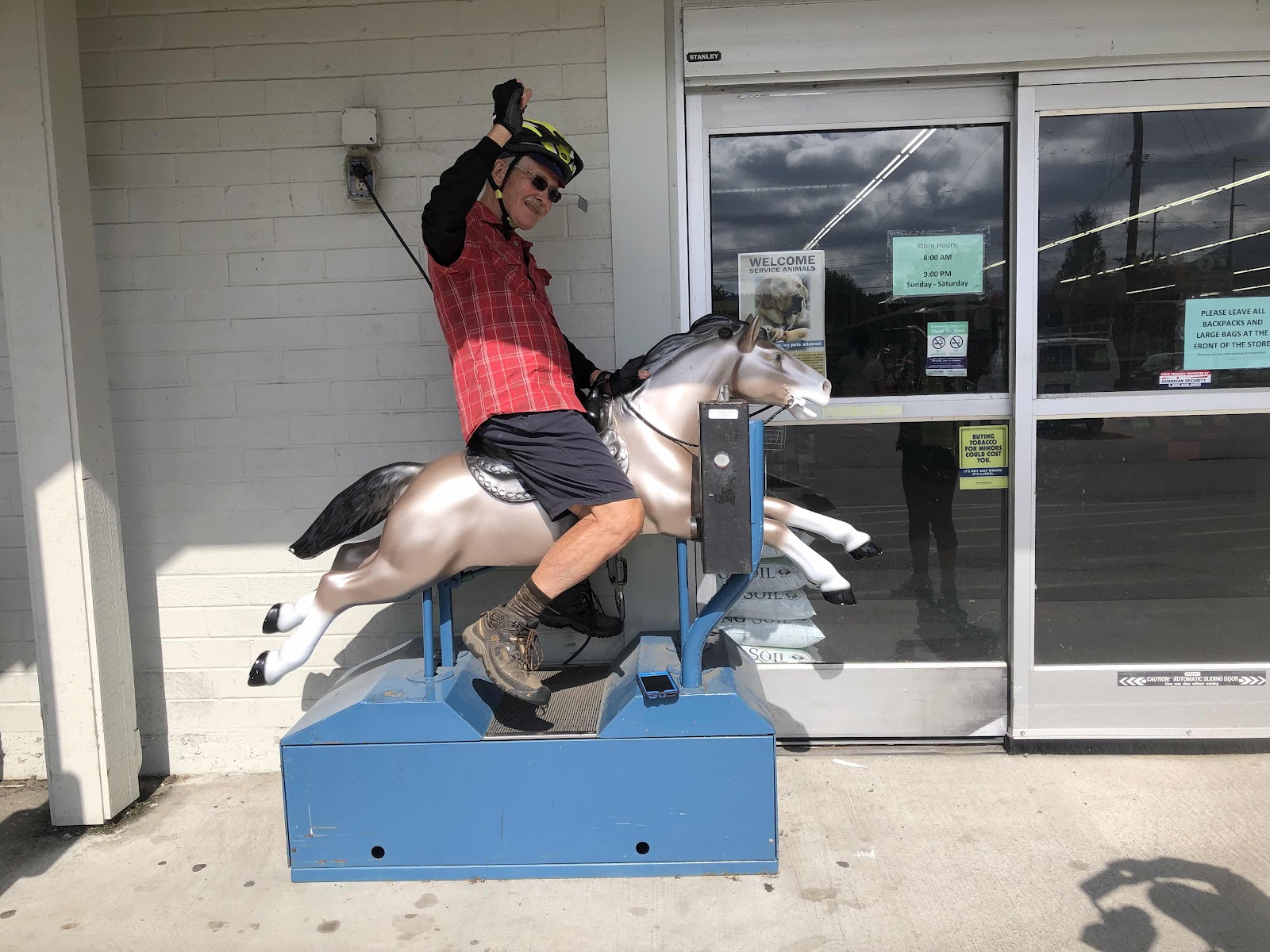 Giddy up!
It was lunchtime, so we headed for the Sultan Bakery (and restaurant). I had a chicken quesadilla and a peanut butter Nanaimo bar. After lunch we rode back to the river because someone at the grocery store had told Janet the salmon were running. 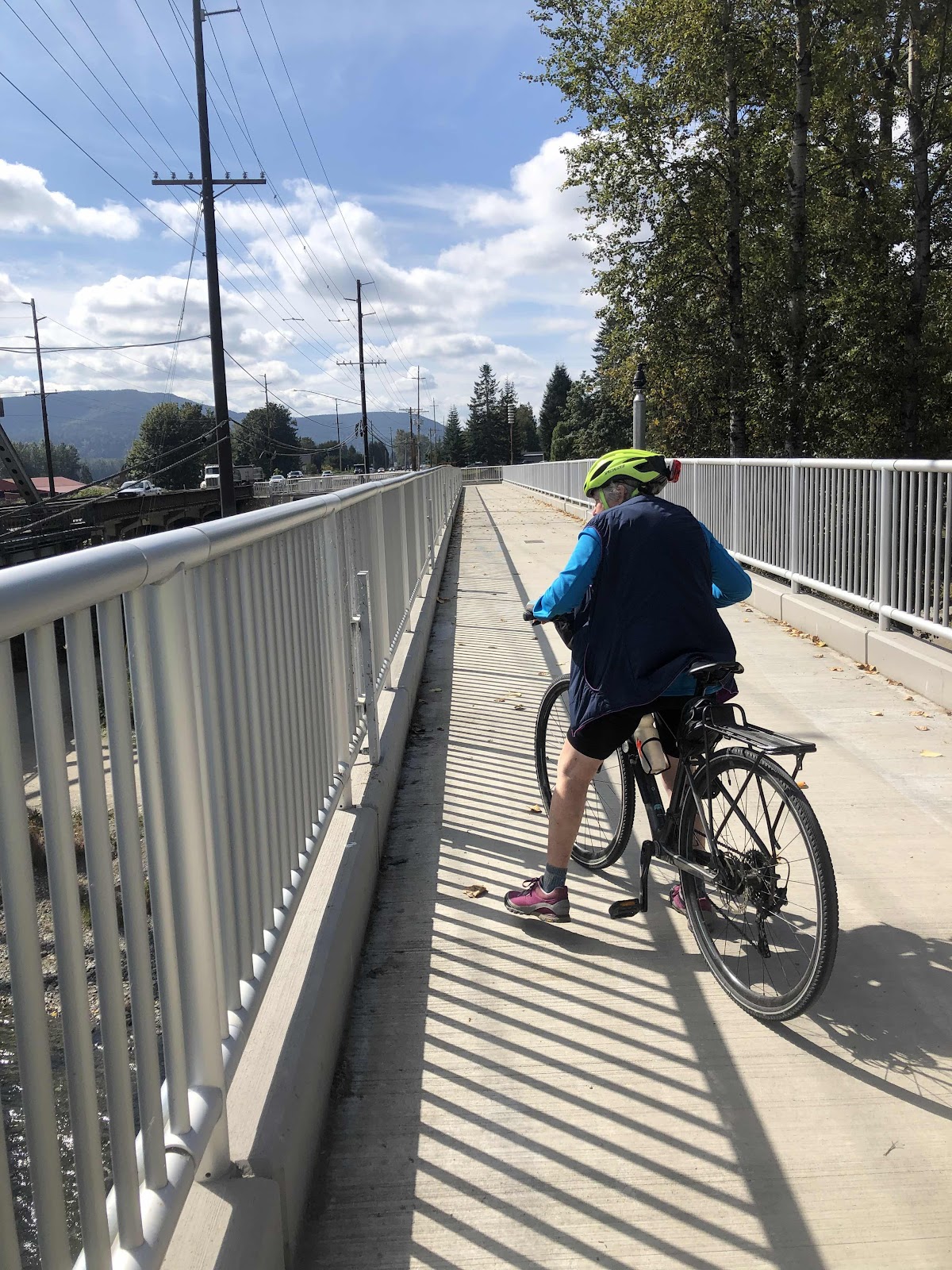 On this seemingly quite new pedestrian/bike bridge next to Hwy 2. 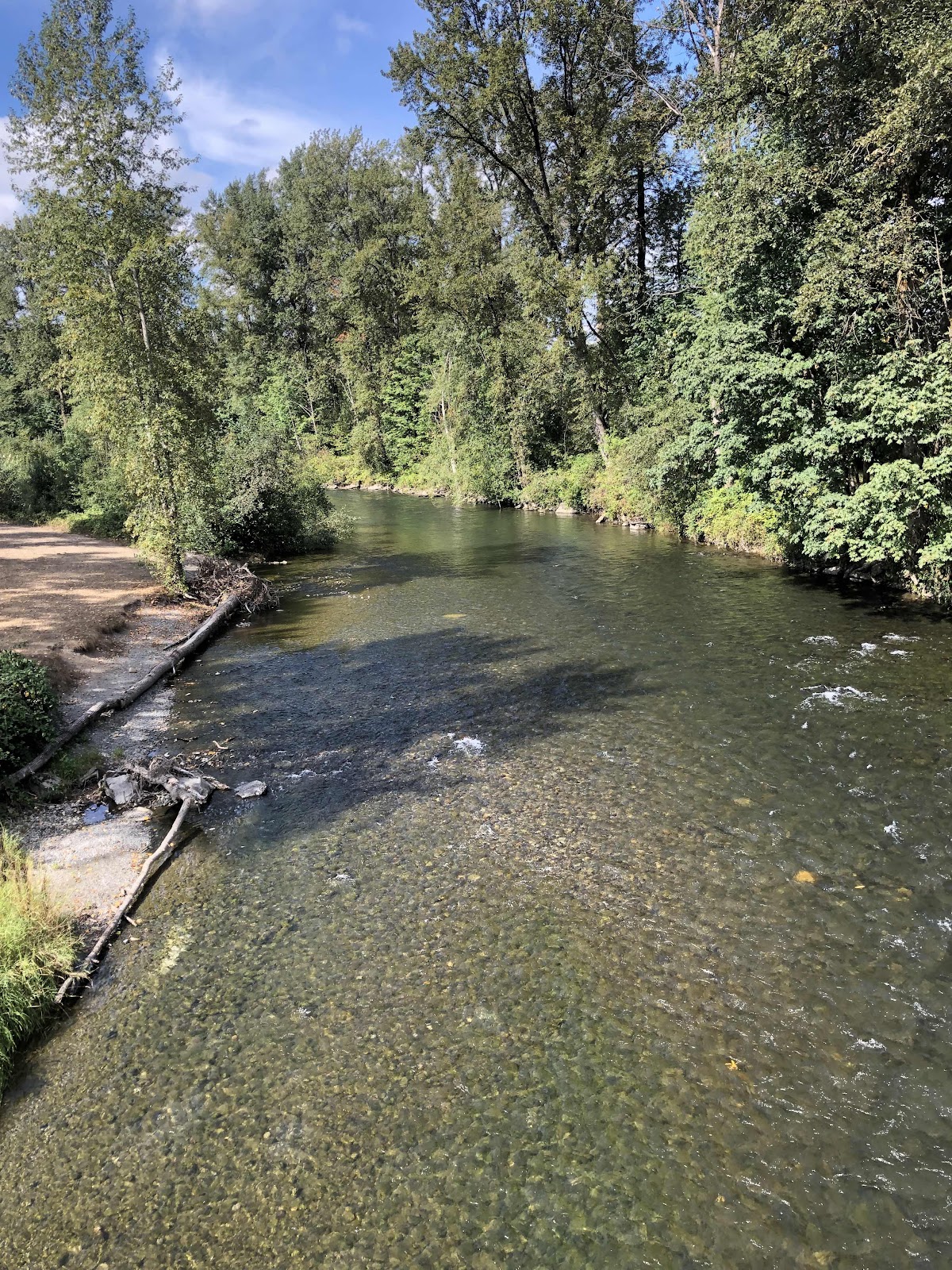 The river. No it not that you just can’t see the salmon…they weren’t there. Bad intel I guess.
Our destination for the day was Wallace Falls State Park. It’s out of Gold Bar. Boy, did that turn out to be not what we expected! The route had us riding on two trails, the Woody Trail and the Gary Ball Trail. We had decided, since the elevation was pretty significant we would just ride the road to the park. We were supposed to have 6+ miles to go. The sign in Gold Bar said it was 2 miles to the park. Initially, we thought that the road was just a lot shorter, then I thought the park is a lot bigger, and it’s two miles to the beginning of the park. Yes and no. It was two miles to the entrance of the park and the trailhead. Then the trail continued. However, the Woody Trail said no bikes, and another sign said there was no camping where we were supposed to go (up to a lake). So, turns out we were done for the day. There are two campsites and a couple of cabins. Campsite #2 was plenty big enough for our three tents. There are no showers here, but there is warm running water in the restroom.
Later in the afternoon, Bob said he was going to go for a walk on the Woody Trail. I went with him (Janet was concerned about leaving the stuff that was charging, so she stayed back). Bob and I discovered that we could ride the Old Railway Grade, and that the Woody Trail splits off from it (Woody Trail is definitely not bike worthy). We walked for almost 1 1/2 miles (Bob in flip flops, and me in my Birkies) before deciding we should turn back. 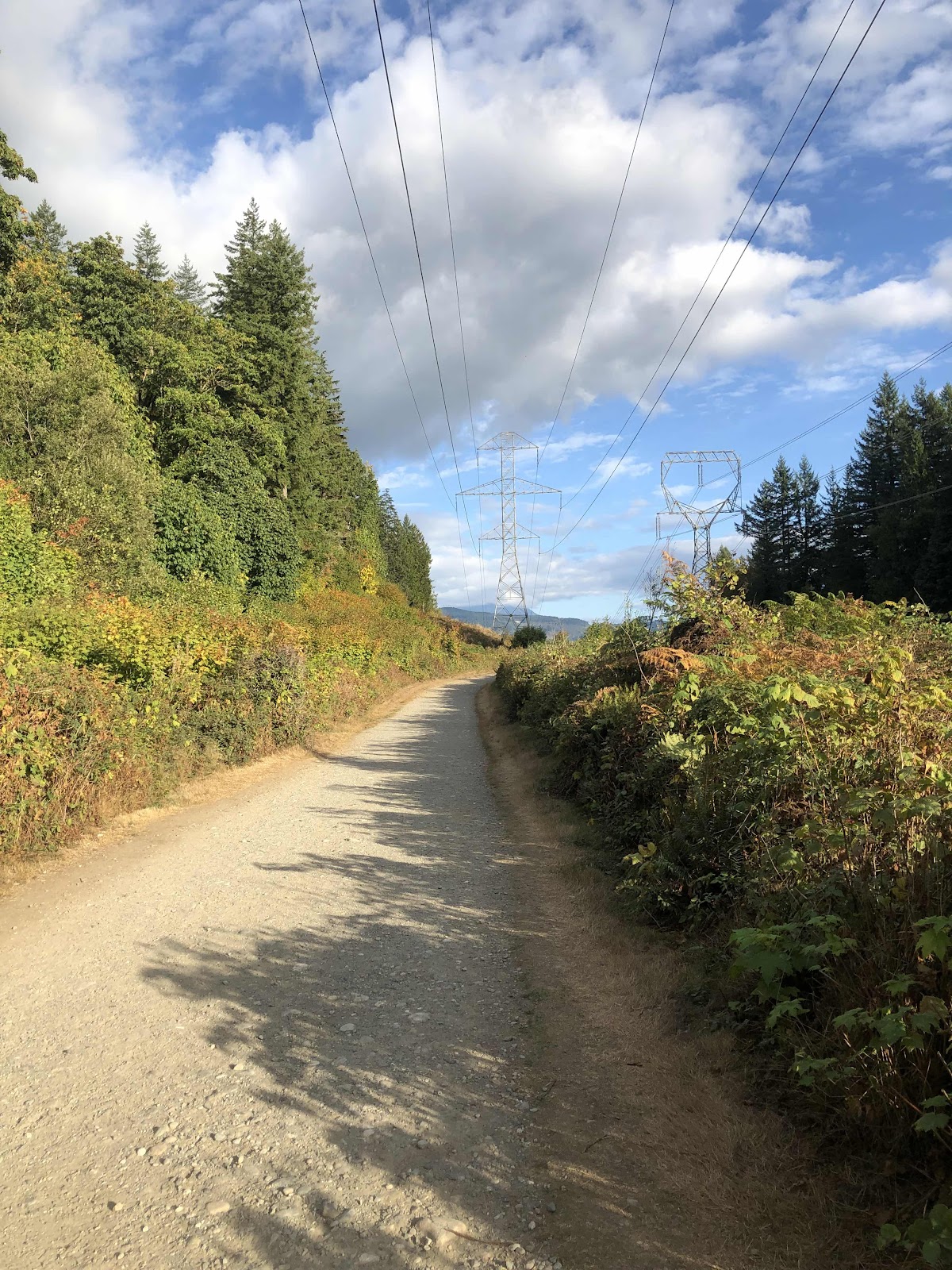 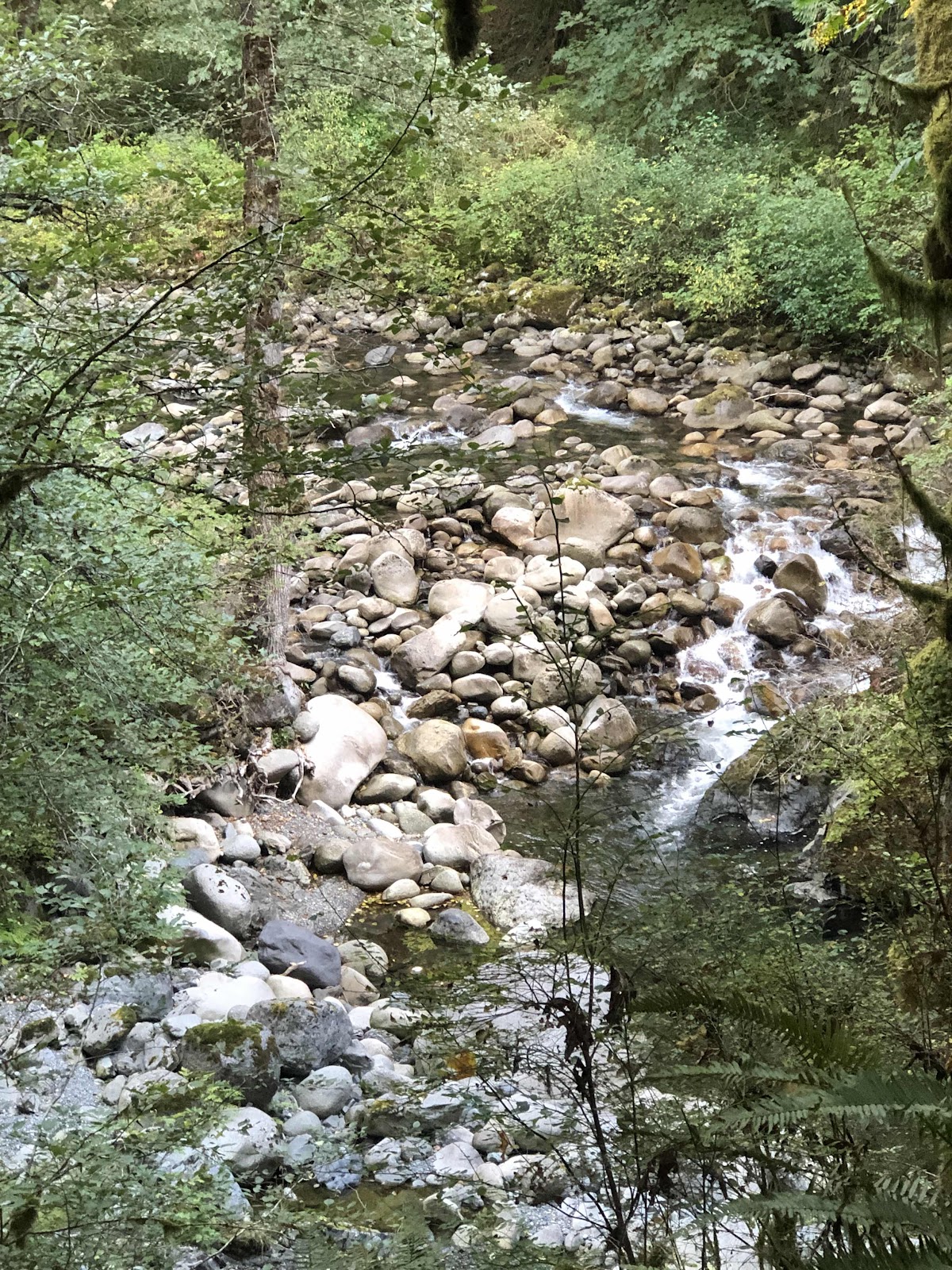 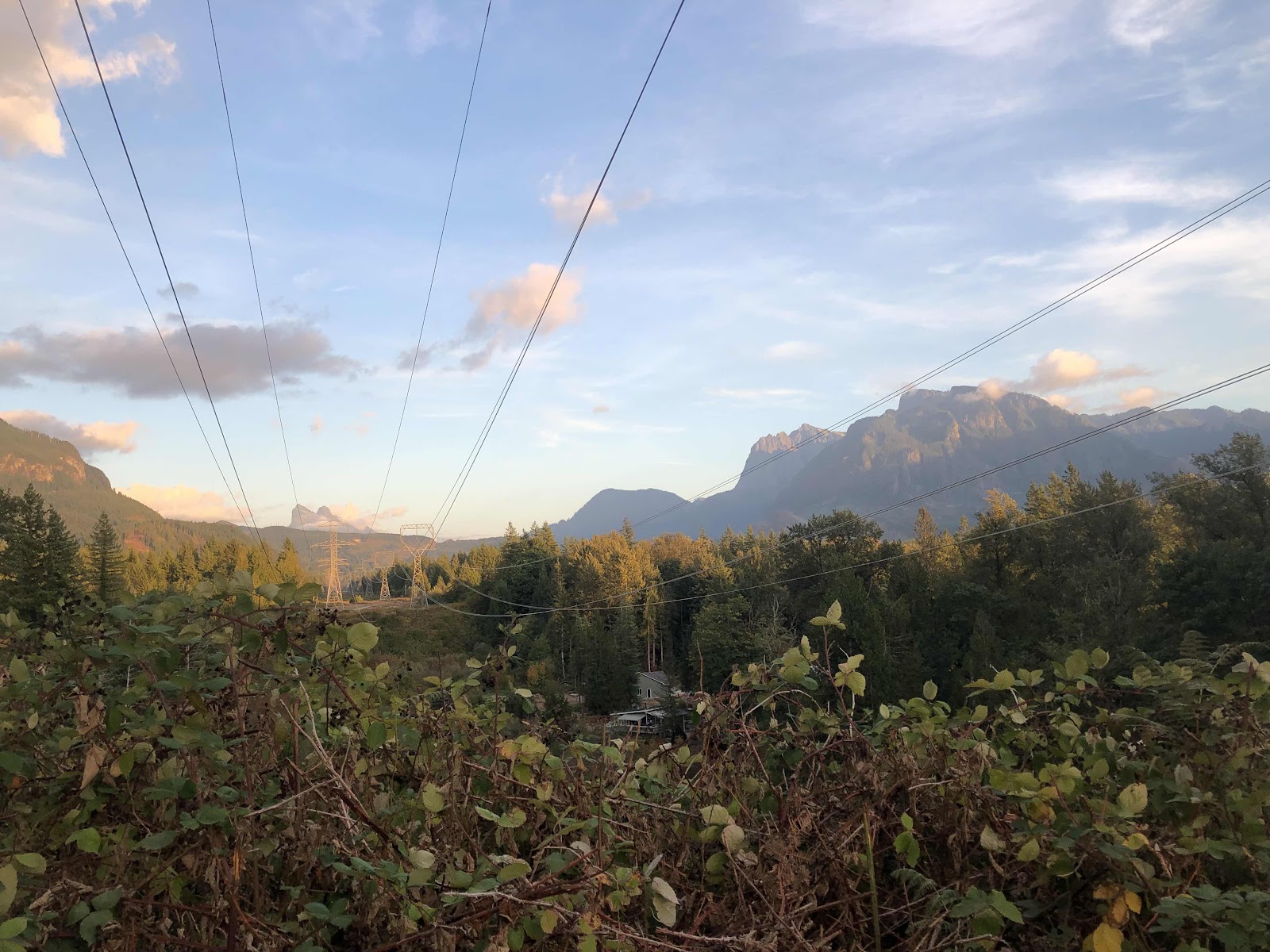 Mt Index to the right.
We returned to our campsite and ate our dinners, and hit the sack. Tomorrow morning we are going to ride the Railway Grade without our gear.

Posted by Colleen Welch at 9:41 PM